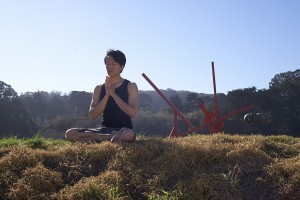 What a topic so dear to my heart! Apparently it has made its way back into the social medias via a blog (http://contemplatingcognition.wordpress.com/2014/07/14/meditation-may-not-be-for-epileptics/) written by Dr. Katharine Blackwell, Assistant Professor of Psychology. Although, to what extent has this become viral, I haven’t a clue. It just popped up on a Facebook forum from one of my dear teachers, and I thought I would take the time to respond to it.

Epilepsy is a neurological disorder that the medical world still has not been able to understand where it stems from. Most of the western medicine treatment focuses on the clinical symptoms (i.e. seizures) to prevent them from occurring as frequently. Much of the treatment involves prescribed medication (some form or variation of Tegretol, which is a multi-decades old drug) or in severe cases, surgery.

My experience with epilepsy, you can read about here (http://yoga.bryantchu.com/specialty/yoga-epilepsy/). I will be the first to admit that I am not a medical doctor nor do I claim to be; however, my practice with yoga, which includes meditation, a physical asana practice and dietary guidelines has made vast improvements in my relationship to epilepsy, as well as my epileptic students’ relationship with epilepsy.

I’d like to note that the published hypothesis are nearly a decade old themselves, and there hasn’t been much further research done to explore this facet of “meditation and epilepsy.” I bring this up, as I’ve had epilepsy for over a score, and the amount of knowledge-base from 20 years ago to 10 years ago to now hasn’t changed much… The social acceptance of it, though, has matured – thanks goodness.

There are varying forms of meditation, and Transcendental Meditation is one that is mentioned in many of these articles. This is the stereotypical chanting or mantra based meditation you might see in movies, but there are also many other types of meditation that you can practice with positive results. To only focus on transcendental meditation seems limiting, but I won’t bash the EEG results, which note higher levels of serotonin released in the body. Effectively, a chemical imbalance in the body will lead to a seizure, and the release of serotonin as a byproduct of your body trying to reregulate is expected.

Other forms of meditation, albeit non-orthodox within the Hindu/Buddhist realms, may include mindfulness, emptiness, awareness, breathing, etc., which engage the Parasympathetic Nervous System (PNS) to allow your body the opportunity to rest (variations of somatic, psycho-somatic, and psychotherapy). Stress has been correlated to being a trigger for epileptic seizures, and its regulation is important to the wellbeing of the subject. I would guess that Dr. Blackwell would agree with my opinion that her therapy and studies with her clients/patients would fall into non-transcendental meditation, but more of the latter, which has helped her patients manage their stress levels, potentially associated with epilepsy; I would hope that they would have seen a drop in their frequencies of seizures and are working on acceptance of their situations.

Focusing away from JUST meditation… A physical practice (i.e. some form of movement/exercise) and diet also contribute to mitigating the symptoms of epilepsy. This is why yoga, as a whole methodology, is a more complete practice, than simply meditation. If clinical doctors want to study serotonin and its relation to epilepsy, they might focus more on where it is more highly dense in the body: the GI tract. So noting that your gastro intestinal tract is where the majority (90%) of your serotonin is to help regulate eating, digestion, etc. really leads me to think that a change in your diet will more likely impact your serotonin levels than transcendental meditation.

So I would challenge public thought around meditation and epilepsy, and broaden the conversation to yoga and epilepsy. I don’t think there is a single “cure” for epilepsy, but given my own experiences and having reduced the frequency of seizures significantly in my own life, yoga (even if it is placebo – I’ll give you that one doctor) has quantifiable results.

Bryant is a yoga teacher, based out of San Francisco. He was first introduced to yoga after falling prey to athletic injuries, as there are many therapeutic benefits to an asana practice; however, it was the community and the philosophy of yoga that drew him to vigorously explore this facet of his life. Since then, he has adopted a yearning for more knowledge (both in himself and others), and continues to teach with enthusiasm. Bryant practices with his teachers: Jessica & Stephane Dreyfus of Triveni Yoga and Lauren Slater.